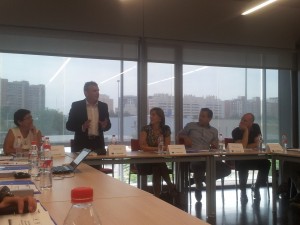 The biannual conference  of specialists in biological 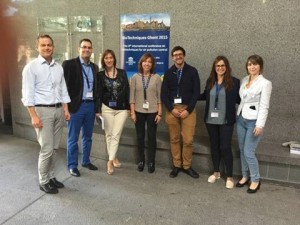 treatments for air pollution control was  celebrated in Ghent on 2-4 of September (link). There was a high participation of researchers of the Universitat de València, who presented three oral presentations and two posters showing an important part of results developed in the framework of the Next Air Biotreat project, in the three work packages, such as: the VOCUSTM pilot plant installed in Exel Composites, the mathematical modelling of biotrickling filtration using laboratory and industrial scale data, and the  BONCUSTM hybrid biotechnology for solvent removal developed at laboratory, pilot and industrial scale that was presented by coordinator Carmen Gabaldón and recieved an important interest from the audience. The conference was very interesting and it allowed to disseminate part of the results of the project to the scientific community. Due to the importance of the conference, Albert Waalkens scientist in charge from Pure Air Solutions also attended, as well as TrainonSEC fellows.

The flexographic end-user Plásticos Romero and the consultant company Incotec proposed to have another meeting with Pure Air Solutions, Universitat de València and Innopack in order to evaluate the next steps for the possible installation of the Boncus technology in his facilities. This meeting was held at Plásticos Romero’s factory in Murcia on Monday 13th June.

Kevin Portune and M.C. Pérez attended to the 16th European Congress on Biotechnologies

First quarterly meeting of 2014 of the GI2AM group

Mid-Term Review of the Next Air Biotreat project