The flexographic end-user Plásticos Romero and the consultant company Incotec proposed to have another meeting with Pure Air Solutions, Universitat de València and Innopack in order to evaluate the next steps for the possible installation of the Boncus technology in his facilities. This meeting was held at Plásticos Romero’s factory in Murcia on Monday 13th June.

On Tuesday 4th of June, Carmen Gabaldón and Albert Waalkens 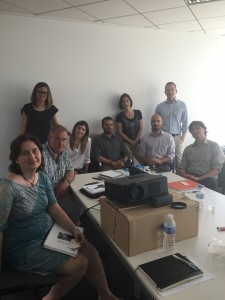 (scientists in charge of Universitat de València and Pure Air Solution respectively), Dr. Feliu Sempere (experienced researcher of the project), and Daniel Vílchez (manager of Innopack) had a very nice meeting with the manager and staff responsible of R&D and the quality and environment departments of Plásticos Romero (an important flexographic company in the Spanish Region of Murcia). The meeting was held at the facilities of the Incotec in València, an environmental consulting company that operates in the whole territory of Spain, who is contracted to study the different technologies to remove solvent emissions. The meeting was very interesting, and helped both the end-user and the consultancy to know better the advantages of the Boncus, where solvents are converted into bio-methane.

We are glad to announce that a very nice article about our project has been published in the main R&D portal of the EU, the CORDIS web page. The article talks about the work developed within the project, outlining the change in the paradigm of abating solvent emissions (link to article).

This publication in the Cordis webpage is helping to disseminate the work, since it has also been published in the Madrimas Knowledge Foundation of Madrid’s regional Government (Spain), which aims to contribute turning the quality of higher education, science and technology and innovation into a key element of competitiveness and well-being of the citizenry, promoting Industry-Academia relation (link to article).

Coordinator Camen Gabaldón was invited to participate on Tuesday 5th of May in a workshop organized by the Equality Unit  of the Universitat de València regarding the inclusion of equality in scientific research (link) . She made a practical presentation about her experience in the two European projects that she is coordinating (Next Air Biotreat and TrainonSEC).

Carmen Gabaldón (coordinator of the project) and Albert Waalkens, scientists in charge of the Universitat de València and Pure Air Solutions respectively, went to the north of Spain in January to disseminate the new technology for solvent abatement (Boncus), which has been developed within the Next Air Biotreat project, with a 50%-50% shared patent between the two partners of the project. Both scientist met a flexographic end user, to which they explained the advantages of the new technology, since solvents are converted into directly usable energy, taking profit of their waste emissions. A commercial agent (Innopack), company specialized in the flexographic and rotogravure sectors was also present in the dissemination meeting.

Article of the Next Air Biotreat project in the web page of the NL Agency of the Ministry of Economic Affairs, Agriculture and Innovation

NEXT AIR BIOTREAT collaborates with the EU FP7 People Network